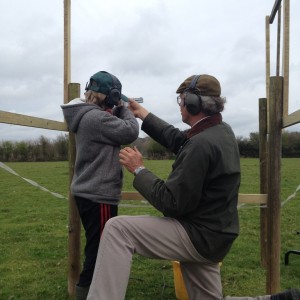 George has enjoyed game shooting since he first used a .410 at the age of about 8 and a 20 bore from the age of 10, inspired by his father and grandfather.   He and a friend started a clay shooting club at school and introduced school friends to the sport.  After joining the Navy he represented Britannia Royal Naval College Dartmouth at clay shooting, and as captain of the team which won the triangular match against RMA Sandhurst and RAF Cranwell.

He has helped to introduce many people to clay and game shooting over the years and continues to enjoy both, occasionally winning local club trophies at home in Devon.

Living in North West Devon, he has facilities at home for coaching novices, and travels to other locations as required to provide shotgun coaching for individuals and small groups, such as for stag and hen days.